The Rosary And Fatima

At every one of her 6 apparitions in Fatima from May to October 1917, Our Lady specifically asked for the Rosary to be said every day, and as if to emphasise its importance even further, in her final apparition on 13th October 1917 she declared: “I am the Lady of the Rosary”.

It was this aspect of her message on which she placed the greatest emphasis, and the reason for it was made clear by the declaration on the Rosary by St John Paul II when he first travelled to Fatima in 1982, and subsequently in the luminous teaching on the value and power of the Rosary in one’s daily life as a Catholic, in his Apostolic Letter Rosarium Virginis Mariae, issued on 7 October 2002.

he teaching in this document which is easily readable is an inspirational aid to understanding the meaning and relevance of praying the Rosary in one’s daily life. It is perhaps best summarised in the following pronouncement:

“The Rosary, though clearly Marian in character, is at heart a Christocentric prayer … it has all the depth of the Gospel message in its entirety, of which it can be said to be a compendium” (Pope John Paul II – Rosarium Virginis Mariae, n. 1).

In his homily at Fatima on 13 May 1982, Pope John Paul II said that the Rosary is Mary’s prayer, “in which … she herself prays with us. Take care of your inheritance of faith … do you want me to teach you the secret of keeping it ?  It is simple, Pray, pray very much, pray, recite the Rosary every day”

Our Lady's words on the Rosary

The Power of the Rosary 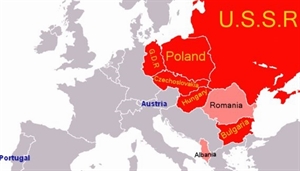 One example of the power of the Rosary was dramatically shown in 1955, when the occupying Soviet Army voluntarily left Austria. Fr Petrus Pavlicek, a Franciscan, had organised a Rosary Crusade from 1946 onwards, which eventually had ten percent of the population praying five decades of the Rosary daily for peace in the country. He also organised candlelit processions in Vienna with a pilgrim Virgin statue of Our Lady from Fatima, which from the beginning were led by the Federal Chancellor, Figl, and then by his successor, Raab.

On 13 May 1955 it was announced that the Soviets were willing to withdraw their troops from Austria and sign a peace treaty. This was the only time in the history of the Soviet Union that the Red Army voluntarily withdrew from a country it had occupied, without firing a shot. In contrast, the attempted uprisings in Hungary, in 1956, and Czechoslovakia, in 1968, were brutally put down by Soviet tanks.

Shortly before the last Soviet troops left the territory of Austria, on 26th October 1955 there was another huge torchlight procession in thanksgiving. In his address to the vast crowd, Raab, the Federal Chancellor, asked Austria’s faithful Catholics to remain true to their faith and unswerving in their prayers to the Queen of heaven. “But for today”, he concluded, “we want to send up a joyful prayer to heaven and end it with the words: ‘We are free ! Mary, we thank you !’” (He taught millions to pray – Fr Peter Pavlicek, OFM,  by Hilda Firtel, Rosary Crusade for the Peace of the World, Vienna).

Quotations on the Rosary

Sr Lucia of Fatima – there is no problem, no matter how great, that cannot be solved by the fervent prayer of the holy Rosary.

St John Paul II’s homily, Fatima, 13.5.1982  – The Rosary is Mary’s prayer, in which … she herself prays with us. Take care of your inheritance of faith … do you want me to teach you the secret of keeping it ?  It is simple, Pray, pray very much, pray, recite the Rosary every day.

St Pio, to friends who asked him for spiritual advice shortly before he died: – Love O Lady, help others to love Our Lady, always recite the Rosary (he used to say the Rosary continuously himself).

St Louis de Montfort – Reverently pronouncing the holy name of Mary in prayer will cause the Word of God to take root in the soul and bring forth Jesus, the fruit of life. Secret of Mary.

– A prayer of great significance, destined to bring forth a harvest of holiness …

1). – Though clearly Marian in character, at heart it is a Christocentric prayer [and] has all the depth of the Gospel message in its entirety, of which it can be said to be a compendium …

2). – Through the Rosary the faithful receive abundant grace, as though from the very hands of the Mother of the Redeemer”. (RVM, n. 1)

– Leo XIII on 1 September 1883 promulgated the Encyclical Supremi Apostolatus Officio, a document of great worth … in which he proposed the Rosary as an effective spiritual weapon against the evils afflicting society. (RVM, n. 2).

3). – [The mysteries of the Rosary] put us in living communion with Jesus through we might say the Heart of his Mother. At the same time, our heart can embrace in the decades of the Rosary all the events that make up the lives of individuals, families, nations, the Church and all mankind; our personal concerns and those of our neighbour, especially those who are closest, dearest to us.  The simple prayer of the Rosary marks the rhythm of human life (n. 2)

The Rosary needed for peace and for the family

The Pope wrote that a revival of the Rosary was needed in order to meet two pressing issues facing society: the need for peace — as requested by Our Lady at Fatima; and the needs of the family, “the primary cell of society, increasingly menaced by forces of disintegration … so as to make us fear for the future of this fundamental and indispensable institution and, with it, for the future of society as a whole.  The revival of the Rosary in Christian families will be an effective aid to countering the devastating effects this crisis typical of our age”. (n. 6).

– By immersing us in the mysteries of the Redeemer’s life, [the Ro] ensures that what he has done and what the Liturgy makes present is profoundly assimilated and shapes our existence (n. 13).

– Contemplating the scenes of the Rosary in union with Mary is a means of learning from her to ‘read’ Christ, to discover his secrets and to understand his message … she teaches by obtaining for us in abundance the gifts of the Holy Spirit. (n. 14).

– Never as in the Rosary do the life of Jesus and that of Mary appear so deeply joined.  Mary lives only in Christ and for Christ ! (n. 15).

Mary’s role in the process of our configuration to Christ:

– The Rosary is both meditation and supplication. Insistent prayer to the Mother of God is based on confidence that her maternal intercession can obtain all things from the heart of her Son (n. 16).

– [The Rosary] continues to be a valuable resource for every good evangeliser (n. 17).

– What is really important is that the Rosary should always be seen and experienced as a path of contemplation (RVM, n. 38).

The Rosary for the family and children – sections 41, 42

The Rosary is and always has been, a prayer of and for the family (n. 41)

Why and how to pray the Rosary

How to meditate on the Rosary