The National Pilgrim Virgin Statue of Our Lady of Fatima 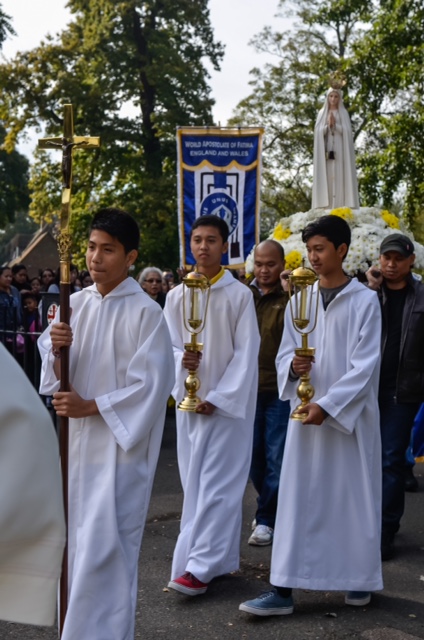 The National Pilgrim Virgin Statue is a hand-carved Image of Our Lady of Fatima blessed by the Bishop of Fatima at the closing of the Jubilee Year on 13 May 1968, and brought to this country the following year.

The National Pilgrim Virgin Statue of Our Lady of Fatima, and Relics of Blessed Jacinta and Francisco travelled around the country, visiting various Cathedrals and churches in 2017, which was the Centenary year of the Fatima message, which was given by the Blessed Virgin between May and October 1917.

The Pilgrim Virgin Statue was crowned at Walsingham, the National Shrine of Our Lady, by Bishop Alan Clark, Auxiliary Bishop of Northampton, on Thursday, 13 May, 1971, in the presence of more than one thousand people, with a crown specially blessed by His Holiness Pope Paul for the occasion.

When Pope John Paul II came to England in 1982, he blessed the National Pilgrim Virgin statue while at the Apostolic Nunciature in Wimbledon.

History of the Statue

The idea of the “pilgrim” or “travelling” statue of Our Lady of Fatima began in 1947, after Cardinal Masella, the papal legate, crowned the original statue of Our Lady of Fatima as Queen of the World, on 13 May 1946, on behalf of Pope Pius XII. The Pope himself spoke to 800,000 pilgrims at Fatima by radio on this occasion saying: “Your ardent love, full of gratitude led you here, and you wished to give a tangible form to this love by symbolically representing it in that precious crown, which is the fruit of much generosity and of many sacrifices and with which we have now crowned the miraculous statue by means our Cardinal Legate” (There is Nothing More: The Blue Army’s Pledge to Our Lady of Fatima,  p 325)

A youth Congress at Fatima the following year suggested the idea of carrying a copy of the statue processionally to Russia. Wonders occurred along the way. When the statue was in the Vatican, Pope Pius XII saw a re-enactment of the Miracle of the Sun which had taken place in Fatima in 1917.

Pope Pius XII said: “In 1946 I crowned her Queen of the World … and the following year, through this Pilgrim Virgin, she has gone forth as though to claim her dominions—and the favours she performs along the way are such that we can hardly believe what we are seeing with our own eyes.”

At first there were only four “official” Pilgrim Virgins. One was taken to Moscow in 1950, and enshrined there in the chapel of the American Embassy; a second travelled to the East; and a third to the West; and a fourth was blessed for the United Nations. Then in 1967, to commemorate the Golden Jubilee Year of Fatima and because in particular of a plea from Vietnam that the “Pilgrim Virgin may remain here until peace comes”, the Bishop of Fatima decided to bless special statues to remain permanently in each nation as “National Pilgrim Virgin Statue” and memorials of the Jubilee year. Twenty-five of these statues were delivered around the world. (There is Nothing More, p. 344.)

On 13 May 1971, the twenty-fifth anniversary of the coronation of Our Lady as Queen of the World by the papal Legate of Pius XII, Cardinal Masella, this symbolism was brought to a glorious climax when Bishops in 70 countries from all around the world simultaneously crowned National Pilgrim Virgin Statues to acknowledge Our Lady’s sovereignty over their individual countries as well as over the entire world. One of these coronations was at the National Shrine of Our Lady at Walsingham. (There is Nothing More, pages 347-48)

This took place in the presence of more than one thousand people. The Pilgrim Virgin Statue was crowned by Bishop Alan Clark, Auxiliary Bishop of Northampton, with a crown specially blessed by His Holiness Pope Paul for the occasion.

When Pope John Paul II came to England in May 1982 he stayed, while in London, at the Apostolic Nunciature in Wimbledon. The National Pilgrim Virgin was received at the Nunciature during this time and was blessed by the Holy Father.