Why Fatima Is Important

Why the apparitions at Fatima are important 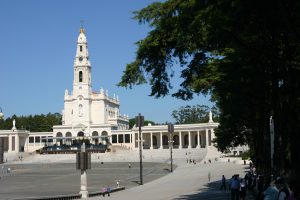 “Following the example of  St John Paul II, a great devotee of Our Lady of Fatima, let us listen attentively to the Mother of God and ask for peace for the world” — Pope Francis

St. Pope John Paull II, at the Beatificaiton of Francisco and Jacinta at Fatima, on 13 May 2000, said: “A message of conversion and hope has spread from Fatima which is the true Gospel of Christ presented anew to our generation.”

His successor, Benedict XVI, said at Fatima, on13 May 2010, that, “We would be mistaken to think that the prophetic mission of Fatima is complete.”

The Message of Fatima reaffirms the Faith of the Church

The former Bishop of Leiria-Fatima, Dom Alberto Amaral, made the following pronouncement on the message of Fatima, which defines its place and significance for the faithful in the life of the Church:

The resurrection of the Church in Portugal after 1917 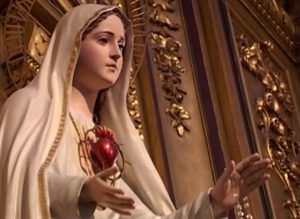 One of the leaders of the violently anti-Catholic Republican government, which had overthrown the monarchy in 1908, boasted that within two generations they would eliminate Catholicism from Portugal. When on 13 October 1917 the vast crowd of some 70,000 people witnessed the stupendous miracle of the sun, they then knew beyond a shadow of doubt that Our Lady had truly been appearing there, and so they willingly responded to her requests for penance and especially for the daily recitation of the Rosary. In response to the people’s faith which led to continuous and ever-increasing streams of pilgrims to the incipient shrine, Our Lady worked many miracles of healing and of conversion, there was a steady growth in devotion to our Lady of Fatima throughout Portugal, and thus within one generation or about 25 years, Portugal witnessed not the elimination of Catholicism but on the contrary the remarkable resurrection of the Church.

The message of Fatima is important because of its direct relation to the history of the 20th century, tormented by the spirit of revolt against God, and this has been clearly demonstrated by the huge changes that have taken place in Russia and its former satellites as a result of Pope John Paul II’s fulfilment of Our Lady’s request for its consecration on 25 March 1984. Changes inside Russia began soon afterwards, and in due course the former Soviet Union dissolved itself out of existence on 25 December 1991, the bitter persecution that the Church had endured in Russia since 1917 ceased, and the threat of a nuclear war provoked by the aggressive Communist tactics of the former Soviet Union has receded.

Having recovered its freedom, the Church is witnessing an unprecedented religious revival in the countries of Russia, Ukraine, Belorussia and Moldavia, where in the past 25 years the Russian Orthodox Church has built or restored from ruins more than 25,000 churches, and opened more than 50 theological institutes and 800 monasteries, which have been filled with monks and nuns. This testimony comes from Russian Orthodox Metropolitan, Hilarion Alfeyev, at an address he gave in South Korea on 1 November 2013(Inside the Vatican, Dec 2013, p. 40).

Fatima – the response from heaven to the revolt against God

he apparitions of Our Lady at Fatima occurred just as the atheistic Communist Revolution was about to seize power in Russia in October 1917, during World War I. In answer to the gravity of the threat posed to the Church by the revolt against God—which has subsequently penetrated the West and throughout the world in the form of materialism, secularism, the “dictatorship of relativism” denounced by Benedict XVI, and the “culture of death” against which Bl Pope John Paul II warned—Mary appeared at Fatima working unprecedented supernatural manifestations of God’s infinite love and mercy, and asked people to repent and not to “offend the Lord our God any more, because He is already so much offended”.

As Bl John Paul II said in his homily at Fatima on 13 May 1982, “the Mother who desires everyone’s salvation, cannot keep silence on what undermines the very bases of their salvation”. In an age when the very existence of God has been questioned as a delusion and Christian teaching and moral principles have come to be regarded as irrelevant in the public domain, the existence and presence of God is strongly re-affirmed at Fatima through His Mother to an extent that has not been seen before.

And indeed, Fatima is the greatest in a series of Marian apparitions which have played a large part in the major Catholic renewals of recent centuries, including Guadalupe in Mexico in 1531, Rue du Bac in Paris, in 1830, and La Salette and Lourdes in France, in 1846 and 1858 respectively.

A message given through the family for the family 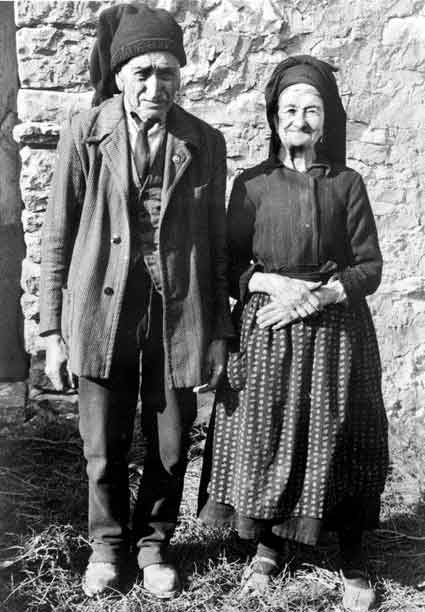 Meanwhile the Beatification of Francisco and Jacinta by Pope John Paul II on 13 May 2000, has opened an important new understanding of the contemporary relevance of the message for the Church, by focusing attention on the role of the family. AtFatima the holy Mother of God chose three very young and uneducated children of devout Catholic parents to receive a message that is of great significance for the Church and the world, as the popes have recognised, and the reason for Our Lady’s choice is only now beginning to become fully apparent.

As Pope Benedict XVI said on his visit to Fatima in May 2010, Our Lady was “the teacher who introduced the little seers to a deep knowledge of the love of the Blessed Trinity and led them to savour God himself as the most beautiful reality of human existence. This experience of grace made them fall in love with God in Jesus”. It is here in this encounter experienced by the shepherd children that one finds the centre and meaning of Our Lady’s apparitions—to proclaim the true and beautiful reality of God’s presence to the world, which increasingly denies and rejects Him, through the message of His Mother.

Despite being so young, the lives of the seers changed radically after their encounter with the beautiful Lady from heaven, and in due course Francisco and Jacinta were beatified because, after a minute examination of their lives, it was found that they had became models of heroic virtue through their exemplary fidelity and commitment in responding to Our Lady’s requests.

All three seers were the youngest children of their family, and this is the first time in the history of the Church that such young children have been beatified who were not martyred by shedding their blood for the Faith. By their beatification, the Church has proclaimed that living Our Lady’s message according to their example is an assured path of personal sanctification for children and adults alike. When a second miracle of healing is worked through their intercession, they will then be proclaimed the first child saints in the history of the Church who did not die as martyrs.

Moreover, the message itself consists of important elements, in particular daily recitation of the Rosary, which will strengthen the faith of families, and this development has come providentially at a moment when Christian family life is experiencing serious threats from an increasingly intolerant secularised society.

In his final act with regard to Fatima, on Sunday 8 October 2000, Pope John Paul II entrusted the whole of the third millennium to the Immaculate Heart of Our Lady of Fatima, in the presence of over 1,400 bishops who had come to Rome for the Jubilee Mass of the Bishops and in the presence of Our Lady’s statue which had been specially brought from the Capelinha. It was the largest gathering of bishops since Vatican II.

Pope Benedict XVI’s visit to Fatima in May 2010 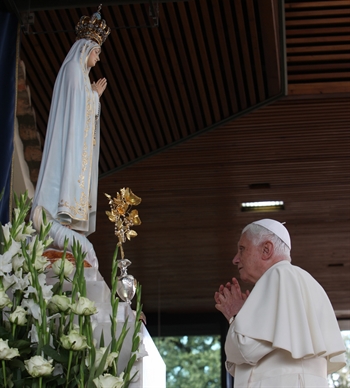 As indicated above, in May 2010, Pope Benedict XVI went to Fatima, and in the course of his visit he said it would be “a mistake to thinkFatima’s prophetic mission is complete”.

When asked about the pope’s comment, Father Federico Lombardi. SJ, director of the Vatican Press Office, explained, “The Pope is telling us that Fatima is a place in which Our Lady and seers, their tradition, help us read the story of our times, the great difficulties of our times, in the light of faith. There is the action of God, there is his Providence, in the goodness of the Virgin Mother but then there is also the responsibility of humanity, which often closes in on itself and because of sin we then have wars, difficulties and suffering.”

“In the midst of all this there is the key of prayer, penitence and conversion to open up the path to good. This is the prophetic message of Fatima,” Father Lombardi explained. “It helps us to read history, even the history of today and tomorrow, in the light of God.”

After Benedict’s visit to the shrine, the Portuguese Cardinal Martins gave the following clarification to the Pope’s reference to the prophetic mission of Fatima, in an interview with Inside the Vatican (issue of June-July 2010, pp. 11-13). Cardinal Martins, who for many years was prefect of the Congregation for the Causes of Saints, was born not far from Fatima, and accompanied Benedict XVI on his pilgrimage to the shrine.

Cardinal Martins said: “It is important to understand the Pope’s words correctly. It is evident that the prophecy of Fatima is not over. It is evident that the phenomenon of Fatima continues to shape the Church and believers. But why ? Because the fundamental truths which the Virgin taught in Fatima are extremely relevant and will always be so. Because they are ever-present values, they are natural and thus sacred values, which cannot be renounced and which are not negotiable.So Fatima will always have something to say: the content of the message which the Virgin entrusted to the shepherd children and through them, to all men and women of our time.  This is why the prophecy is not over, and never will be !”

At the pope’s request, all the Portuguese bishops consecrated Francis’ pontificate to Our Lady at Fatima, on 13 May 2013. And again at his direction, the Marian Day in the Year of Faith was celebrated at Rome, in the presence of the original statue of Our Lady from the Capelinha in Fatima, on the twelfth and thirteenth of October—the day of the miracle of the sun and Our Lady’s final apparition at Fatima. The statue was first taken to the residence in the Vatican grounds of Pope Emeritus Benedict XVI, where he received it with warm personal devotion. Then the statue was solemnly processed up to the altar in front of St Peter’s Basilica, where Pope Francis received it, placed a rosary at the feet of the statue and kissed it.

The pope began his Marian catechesis on the afternoon of Saturday 12th by stating: “this event of the Year of Faith is devoted to Mary, the Mother of Christ and the Mother of the Church, our Mother. The statue of Our Lady which has come from Fatima helps us to feel her presence in our midst. It is a fact: Mary always brings us to Jesus. She is a woman of faith, a true believer.” At the conclusion of the pope’s catechesis, one of the national leaders of the World Apostolate of Fatima who had come to Rome for the event had been invited to shake hands with Pope Francis, he was warmly received by the Holy Father, and this gesture signified the Pope’s approval of the work of the Apostolate in promoting Our Lady’s message in the Church.

Finally, on Sunday 13th, Pope Francis renewed the consecration of the world to the Immaculate Heart of Mary.

Hence in the light of all these developments it is apparent that the appeals of Our Lady at Fatima remain just as relevant as ever, and the mission of the WAF is to extend her invitation to comply with her requests to all people of goodwill, trusting in her promise that in the end, “my Immaculate Heart will triumph and a period of peace will be granted to the world”.