The Fatima Centennial Crown - an Explanation 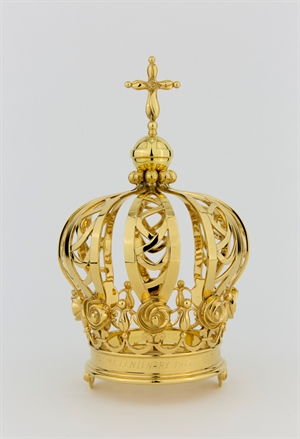 The following is the explanation for the design of the crown that was made by Mr Jorge Leitao’s family firm in Portugal, and offered by him to Our Lady in return for whatever items of gold and silver the faithful might freely wish to offer Our Lady during 2017.

This was how it was done in Portugal when in 1942 his grandfather made the very famous crown that is only worn on the 13th of the month at Fatima, in gratitude to Our Lady for preserving Portugal in peace during World War II. The precious crown is gold, which was made from the gifts of the women of Portugal, it weighs 1.2 kilos, and is decorated with 313 pearls and 2,679 precious stones.

Pope Pius XII addressed Our Lady of Fatima as Queen of Peace and of the World, when his legate, Cardinal Masella, placed this crown on the head of her statue at Fatima on 13th May 1946.

The crown of the new millennium is a reinterpretation of the crown that is present every day on the image in the Chapel of the Apparitions at Fatima.

Like the original, this work created by Leitao & Irmao was inspired by the appearance and by the message of Our Lady at Fatima in 1917.

The orb surmounted by the cross is the universal symbol in the Christian world of reigning royalty. Our Lady is Queen.

The cross is surrounded by four large rose petals symbolizing the Mother who swathes the child in her love. A rosebud blooming in the centre of the Cross evokes the life that renews itself in sacrifice.

The eight brackets that link the orb to the base of the crown are supported by eight roses in bloom with enlarged petals. The crown is closed at the top under the orb to signify its union with the base through its supporting brackets.

The band round the base is engraved with the lettering:

The central theme of roses evokes the title by which Our Lady proclaimed herself: I am the Lady of the Rosary.